All eventsEvents of the area
Asiago Plateau 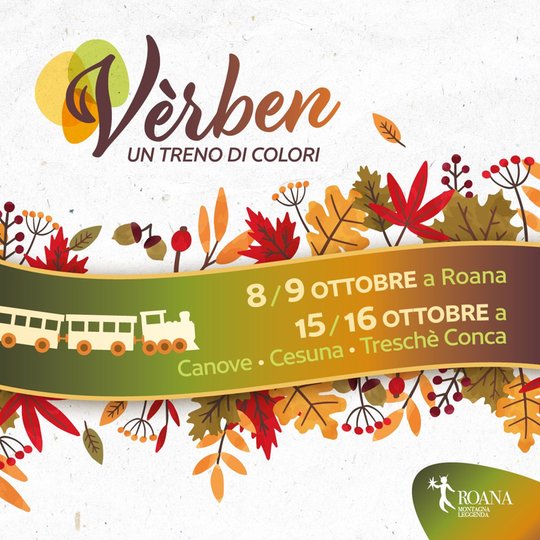 The appointment with the magical world of autumn colors is back in two weekends.
8 and 9 October in Roana with the traditional patronal feast of Santa Giustina and the following weekend 15 and 16 October with the train that will pass on the route of the Old Railway between Canove, Cesuna and Treschè Conca.

The news is not over though ...
At the Multifunctional Palace you will find the Animal Farm and artistic workshops for all ages.

The details of our program? Here they are!

SATURDAY OCTOBER 15
10 a.m.
Opening of the Vèrben event at the Multifunctional Building.

Departure of the trains in the company of AsiagoGuide with stories about Cimbrian legends during the journey.

16.30
"Hunt for the Winged Leon" with Fabio Ambrosini Bres

SUNDAY 16 OCTOBER
10 a.m.
Sunday opening of Vèrben and departure of the train in the company of AsiagoGuide with the story of Cimbrian legends during the journey.

"La Dama delle Civette" with its birds of prey

During the event, the traveling clowns of the Lustigh association will appear with soap bubbles and face painting.

We are waiting for you !!

Receive the best offers and useful news for your holidays